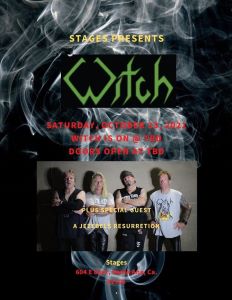 Everyone who knew him loved him.
A great friend, photographer, roadie,
and all-around nice guy.
Thank you for 34 years of friendship.
You are missed, Buddy. We are sad to report that longtime WITCH friend & crew
member Larry Meyers passed away October 29, 2017
(pictured above with Peter in 1987). Larry and his brother
Happy worked with Peter during the SPECIAL FORCES days,
then made the transition to WITCH in 1983, with Larry
ultimately being Scott Rickett's guitar tech 1986 to 1988.

An article about WITCH appeared on August 17,
2015, on the TeamRock.com website.
Read it HERE

The classic THE HEX IS ON lineup of
Peter, Jim, Ronny, & Punky will play
one night only at the Jezebel's Resurrection concert
on Saturday, June 22, 2013, at Malone's in Santa Ana!
This will be their first show together since 1989.
More info coming soon!!!

In March, 2013, Peter's HIGHWAY bandmate
Buddy Clark was killed in a motorcycle accident
in Huntington Beach, CA.  Our condolences go out
to Buddy's friends and family.

Reviews of THE HEX IS ON...AND THEN SOME are coming inand they have been great!  Check out the links below:

Our friend, Johnny Schultz, passed away on November 11,2011.  Johnny and his family are true legends in the Orange County rock and roll scene.  From The Woodstockto Jezebel's and beyond, Johnny brought great musicand good times to everyone.  Johnny also managed WITCH in 1986. Peter Wabitt returned to Huntington Beach on December
22, 2010, and he and Punky hung out on Christmas Day.
Thanks to Punky & Peter for sending the picture below! It is with great sadness that I have to report the sudden passing of David Ezrin.  David passed away on December 3, 2008, and his funeral was December 7.  He was just 42 years old.  Everyone in WITCH sends their deepest condolences to his family and friends, Scott Rickett and everyone at Soul Surfer Records, and all those who knew David personally & through his music.  He is missed. Below is information from soulsurferrecords.com:

IN MEMORY OF DAVID EZRINDavid Ezrin made his transition on December 3rd . In memory of David, the Soul Surfer family has invited family and friends to share thoughts and words that celebrate and remember his extraordinary life.

The heart of a man is made up of his passions, his will, and the fortitude it takes to stay true to the convictions that define him. David was a masterful artist and dedicated father. As a pianist, songwriter and storyteller, he used the universal language of music to speak his truths. With profound intellect, he was a man that heeded the virtues of provocative thought and deep introspection. He was courageous and never afraid to sound the bellow of the symbolic trumpet, fully aware that the melody of unfamiliar keys was the manifestation of his innate genius.

David stood firmly in his vision for humanity, and the generosity by which he shared his life through action, brought inspiration to those fortunate to know him. Through his love of music, his endearment to family and his commitment to friendship, David the teacher, leaves us with valuable lessons in the authentic meanings of service and selfless love.

Our love for David is reciprocal and without condition. As you read these letters, allow David's life to remind us during this time of reflection and beyond, of our own lives, and how we too, are beholding of the great Light. In gratitude, let us use it to serve others and to make our world a more loving and friendlier place. David remains in our hearts and in our minds as a brother, a son, a father, a friend and above all, a unique and beautiful spirit that lives on. For, we have heard the trumpet call, and thus, we carry David's Light with us now and forevermore.

Words by Elijah Rock on behalf of the Soul Surfer Family
******
From Lita Ford:

The world has lost a wonderful person, a talented musician, and great song writer.

I have so many fond memories with Ezzy.

Writing songs, partying, wondering how we were going to get home, hahahaha.

He was so much fun to be around, so creative.

David left us all a beautiful girl, Zoe.

May her life always be full of love and passion.

I hope she knows how much her Dad loves her.

He was always talking about her.

He was so proud of his little girl.

I loved hearing him talk about Zoe; it warmed my heart.

The last time I saw David was when he came out to our house in about 10 years ago.

We had a lot of fun. He hung out with my husband a lot on that trip and he has a great story to share.

So I got a few friends together and booked a 12 hour trip.

To get to the good fish took 4 hours!

Ezzy slept all the way there.

When we got there he woke up and started puking; he was soooooo sea sick!

Funny how you're always OK until the boat stops!

So there we are, 4 hours from shore and Ezzy's sick as a dog.

I finally talked him into fishing.

He could either puke and do nothing or puke and catch some fish!

We slayed 'em that day.

We have a picture at our home that I'll try to grab so I can scan it to post.

We caught over 400 pounds of grouper and snapper!

So we get back after another 4 hour boat ride and Ezzy takes 1 step off the boat and gets stung in the face by a bee; OMG!

He just started laughing and we took the picture with our fish.

He said even though he got sick he loved that fishing trip.

He was so happy that we did it.

When we got home we went to the studio.

Ezzy heard a track I was singing on and wanted to play on it.

We drank a bit of wine and recorded until 3 in the morning.

He was acting like the Phantom of the Opera. It was awesome!

We had such a fun day.

Ezzy touched a lot of people. Jim and I will  miss him a lot.

We both wish we would have spoken to him more regularly.

You always think that you have tomorrow.

Betsy Bitch is featured on the new CD, Forever Chaos, by Japanese melodic death metal band SHADOW.  The band covers the BITCH classic "Damnation Alley" and Betsy supplies the vocal!  Check out more from SHADOW at www.shadow666.net and purchase the CD here.

It happened:
Sorry if you missed it!  It was a great night for the band, and hopefully it's the first of many more for them.
Some people have been writing and asking about Peter.  Pete's not well and is presently unable to do it. The band is hoping he gets well soon and wishes him the best in his recovery....

Videos from the Halloween Show are now up on YouTube!
www.youtube.com/witchtheband